Newspaper and poster advertisements placed by slaveholders offering rewards for the capture and return of runaway slaves.

Fugitive slave advertisements in newspapers developed their characteristic form sharing certain similarities in structure and content. Over time, stock engravings of runaway slaves developed to draw the attention of readers. A common engraving used in many adverts is shown here (called ‘The Runaway’ originally from The Anti-Slavery Record published in New York City by the American Anti-Slavery Society).

In the majority of cases, the missing slave’s owner placed the advert. In some instances, however, adverts were placed by those to whom slaves had been hired out. This system of renting out slaves to other property owners became popular late in the antebellum period. Other instances in which the slave’s owner was not placing an advert directly include a variety of representatives, such as guardians of slaveholding minors, executors of estates, and agent for slave owners. 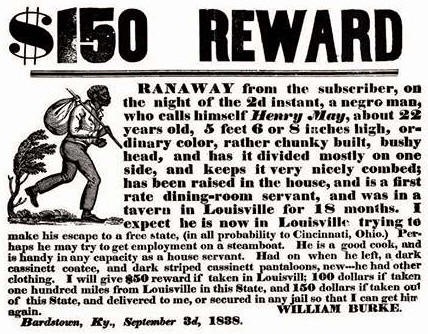 The structure of the advert typically started with the reward offered for the re­turn of the fugitive, usually increasing as the fugitive fled farther from his or her place of enslavement. The name and residence of the slaveholder, and the date of the escape would be noted. Then followed the body of the advert in which the slave-holder or his or her agent provided informa­tion intended to help identify and locate the fugitive. Such information included the name of the runaway and other names by which he or she might be known, and a physical de­scription usually noting approximate age, skin color, weight, height, clothing, identifying marks, scars or physical defects. Certain descriptions were more commonly found than others. Skin color, for example, ranged in description from “black” to “mulatto” or “yellow skinned”. Physical descriptions usually included a veritable inventory of scars, either from diseases like smallpox, property markings (i.e. branding) or as a result of labor-related accidents (e.g. cotton gins, “cut of an axe”, etc.).  Accounts of other physical traits include limps, deformities, birthmarks, and missing limbs.

Many adverts mentioned character or personality traits or unusual skills or abilities. Some also mentioned the presumed escape motive, possible destinations and whether the fugitive was thought to have received any assistance – and, occasionally, from whom. Frequently mentioned traits include stuttering, alcoholism, hostility toward authority, avoidance of eye contact, sullenness, “very likely”, and a “down look”. Additional identifying information often includes a mention of the slave’s trade or skills such as farming, blacksmithing, or coopering. Sometimes family members in other locations and a list of previous owners were included, as these might provide clues as to the slave’s whereabouts.

Many runaway slave adverts mention whether the slave was literate or illiterate. In the case of a literate fugitive slave, this fact usually prefaced the owner’s suspicion that the slave may have possession of or would create a forged free pass.

Here is one advert that caught my eye, a $300 reward for Harry aged about 19 years, Ben aged about 25 years and Minty aged about 27 years. Minty is of course the nickname of Harriet Tubman, who would later in life have a reward of some $40,000 offered ‘Dead or Alive’ for ‘stealing slaves’ (i.e. a conductor on the Underground Railroad). Harry and Ben were Harriet’s two brothers and on 17th September, 1849, all three had left their home in Poplar Neck, Dorchester County, near Cambridge, Maryland, to travel north to gain their freedom. Their owner, Eliza Ann Brodess, posted this advertisement in the Cambridge Democrat newspaper.